Click on each title to reveal more information about that topic. 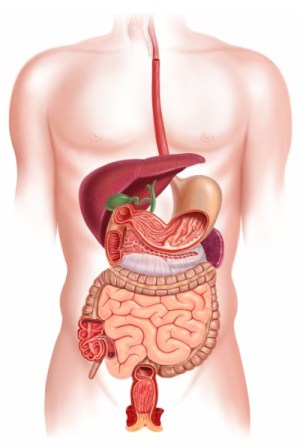 The patient educational tool works by clicking on the organ/image to learn more information. I am here to explain the basic information to you about your digestive system, if you are experiencing any medical problems, please consult with your physician. 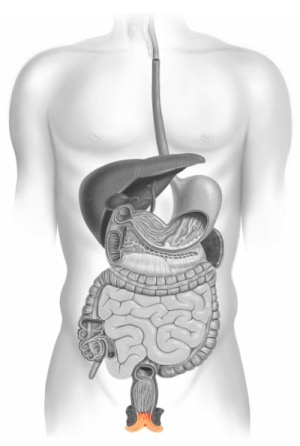 Deep rectal abscesses may be caused by intestinal disorders like Crohn’s but there are generally no other symptoms.

Fecal incontinence is the inability to hold a bowel movement until reaching a bathroom. It’s also referred as accidental leakage while passing gas of solid or liquid stool. Fecal incontinence has many causes, diarrhea, constipation, muscle damage, hemorrhoids and nerve damage. 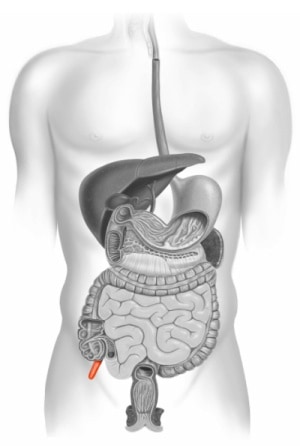 For unknown reasons the appendix becomes inflamed or infected causes severe pain in the right lower part of the belly.  Symptoms include nausea and vomiting.

Tumors in the appendix that secrete chemicals that cause flushing and diarrhea. 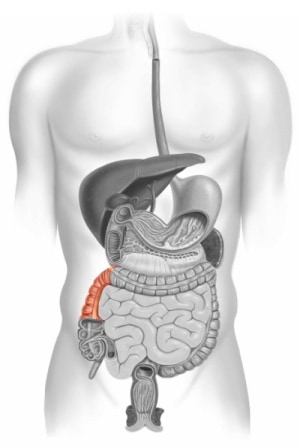 The ascending colon is the first section of the large intestine, connected to the small intestine by a section of the bowel called the cecum.  It runs through the abdominal cavity up towards the transverse colon. 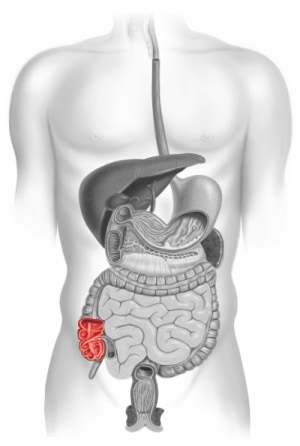 The cecum is the beginning of the large intestine, a big pouch that receives waste from the small intestine, then the cecum passes it on to the colon.

Volvulus refers to the twisting of a portion of the intestine around itself.  Volvulus occurs most frequently in the colon, although the stomach and small bowel can also twist. The part of the digestive system above the volvulus continues to function and may swell as it fills with digested food, fluid, and gas. 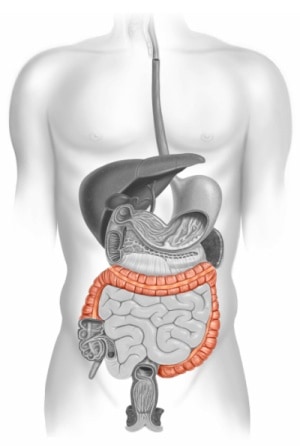 The colon, called the large intestine is divided into four parts, the ascending colon, transverse colon, descending colon and the sigmoid colon.   The colon removes water, salt and nutrients forming the stool.

Colitis is caused by inflammatory bowel disease, the result is an inflamed or swollen colon.

Colon cancer starts in the glands in the lining of the colon and rectum.  Typically colon cancer starts as benign cancer polyps that slowly develop into cancer.  Colon cancer is one of the leading causes of cancer-related deaths in the U.S.  Early diagnosis is key to help prevent and treat the spread of colorectal cancer.

An inflammatory disease that causes abdominal pain and diarrhea, effecting the colon and intestines.

Diarrhea causes stool to be frequent, loose and watery, usually from infections of the colon or small intestine.

Ulcerative colitis is an inflammatory disease that affects the colon and rectum. 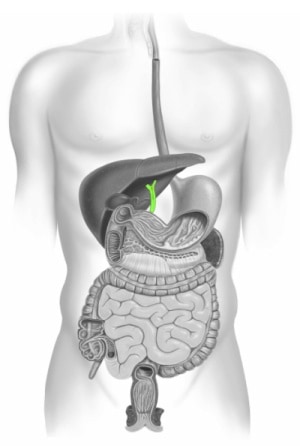 Bile is made by the liver to help with digestion.  Bile is stored in the gallbladder and then carried out of the body through bile ducts.  When the bile duct is blocked, waste builds up in the liver causing problems to the bile flow.

Common disorders of the bile duct:

Cholangiocarcinoma is a cancerous growth in the bile ducts.  It is rare only occurring in about 2 out of 100,000 people.

Choledocholithiasis is the presence of a gallstone in the common bile duct. Symptoms include abdominal pain, fever, loss of appetite, nausea or vomiting.

Gallstones
When substances in bile become crystallized in the gallbladder, gallstones are formed.  The gallstones can be as small as a grain of sand or as large as a golf ball.  They can be hard or soft, smooth or jagged.  Gallstones are very common and harmless, but are painful. 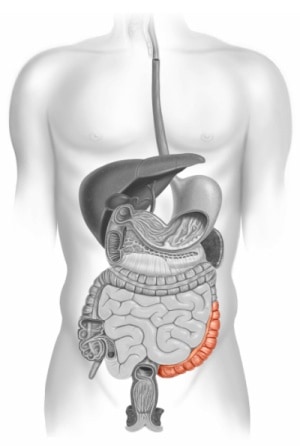 The descending colon passes through the upper back of the abdomen along the left side of the kidney. 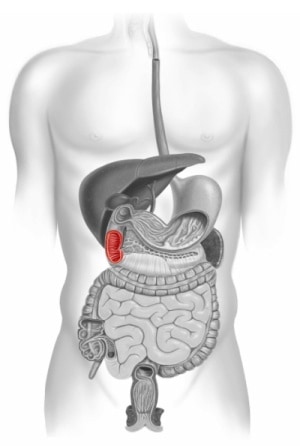 The duodenum is located between the stomach and the middle part of the small intestine.
After food mixes with stomach acid, it moves into the duodenum where it mixes with bile from the gallbladder and digestive juices from the pancreas.

Duodenal ulcer
An ulcer is an open sore on the inner lining of the stomach or upper small intestine. It causes burning and pain anywhere from the breastbone to the navel.

The primary symptoms of a duodenal ulcer are heartburn, severe stomach pain, unplanned weight gain, and a burning sensation felt at the back of the throat.

The esophagus is the tube that carries food, liquids and saliva from your mouth to the stomach.

Achalasia is a rare disorder of the tube that carries food from the mouth to the stomach (esophagus), which affects the ability of the esophagus to move food toward the stomach. With achalasia, the muscle ring does not relax as well because of damaged nerves of the esophagus.  Common symptoms are regurgitation, chest pain, cough, difficulty swallowing, heartburn or weight loss.

Barrett’s esophagus is a disorder in which the lining of the esophagus (the tube that carries food from the throat to the stomach) is damaged by stomach acid.  When the muscles do not close tightly, stomach acid can leak back into the esophagus causing reflux.  The acid reflux may lead to heartburn

Patients with Barrett’s esophagus may develop more changes in the esophagus called dysplasia. When dysplasia is present, the risk of getting cancer of the esophagus increases.

Candida esophagitis is a yeast infection of the esophagus, the tube that carries food from the mouth to the stomach. It occurs when the yeast spreads from the mouth down the esophagus.  Common symptoms are difficulty or painful swallowing, fever or oral thrush.

If you have HIV/AIDS, Diabetes, Leukemia or other conditions of a weak immune system, you are at higher risk for a Candida esophagus infection. 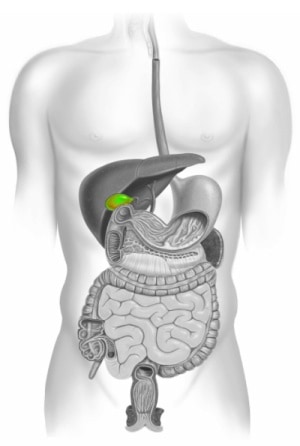 The gallbladder is a small pouch, pear-shaped organ that sits under the liver in the upper abdomen. It stores bile produced by the liver. When food is being broken down in the stomach and intestines, bile is released from the gallbladder through a tube called the common bile duct, which connects the gallbladder and liver to the first part of the small intestine.

Gallstones
When substances in bile become crystallized in the gallbladder, gallstones are formed. The gallstones can be as small as a grain of sand or as large as a golf ball. They can be hard or soft, smooth or jagged. Gallstones are very common and harmless, but are painful. 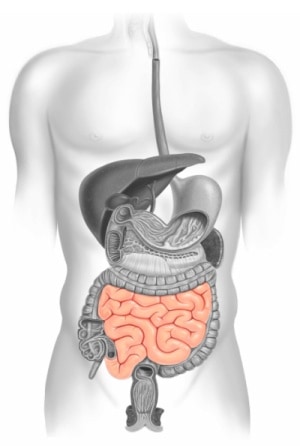 Crohn’s disease
Crohn’s disease is an inflammatory bowel disease that usually affects the intestines, but may occur anywhere from the mouth to the end of the rectum.

Ulcerative colitis
Ulcerative colitis affects the colon and the rectum, causing inflammation and ulcers in the lining of the large intestine. The exact cause is unknown. Some think ulcerative colitis might be caused by the immune system overreacting to normal bacteria in the digestive tract. 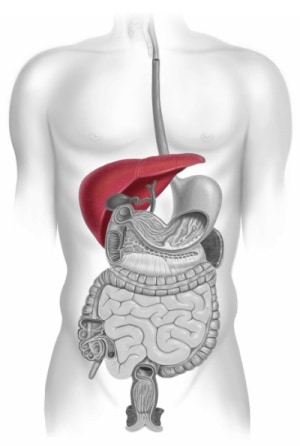 The liver is the largest organ inside your body sitting just under your rib cage on the right side of your abdomen. The liver helps the other digestive organs to digest, absorb and process food; it also helps get rid of toxic substances from your body.
The liver’s main function is to filter the blood coming from the digestive tract, before passing it to the rest of the body.

Hepatitis
Viral hepatitis causes inflammation of the liver. Hepatitis A, B and C are all distinct diseases that affect the liver. Your doctor will run tests to determine which type of hepatitis you have and then determine the best treatment options.

Cirrhosis
Long-term damage to the liver creates scarring of the liver, called Cirrhosis. The scar tissue forms making the liver unable to function properly. An unhealthy liver makes it difficult to fight infection, and clean the blood to help food digestion. Cirrhosis is caused by chronic alcoholism and hepatitis.

Cirrhosis can lead to other problems like high blood pressure, enlarged veins in the esophagus and stomach and kidney failure.

Gallstones
Gallstones are pieces of solid material that form in the gallbladder. The gallbladder is a small organ located under the liver. The gallbladder helps the digestive process by storing bile and secreting it into the small intestine when food enters. Gallstones form when there is an imbalance in the substances that make up bile. Genetics, body weight, diet and decreased mobility are all factors that can lead to gallstones.

Gallstones are called the silent stones because typically no symptoms show. However, when symptoms do appear its usually pain in the upper abdomen, nausea or vomiting.

Liver cancer
Typically most liver cancer forms in other parts of the body then spreads to the liver. The liver performs important functions like removing toxins from the blood, making it ready for excretion. Because all the blood in the body must pass through it, the liver is unusually accessible to cancer cells traveling in the bloodstream.

Primary liver cancer (hepatocellular carcinoma), cancer that starts in the liver, only accounts for 2% of cancers in the U.S. Primary liver cancer tends to occur in livers damaged by birth defects, alcohol abuse or chronic infections.
Men are at a much higher risk then women for primary liver cancer, affecting twice as many men as women, making it the most common type of cancer in males over 50.
Liver failure
Liver failure usually occurs gradually over many years when the large parts of the liver become damaged from infection, genetic diseases and alcohol abuse. Because the liver is unable to function properly, liver failure is a life-threatening condition that demands urgent care.

Liver failure may be difficult to diagnose but early symptoms include nausea, diarrhea, fatigue and loss of appetite. Other serious symptoms are jaundice, bleeding easily and swollen abdomen. 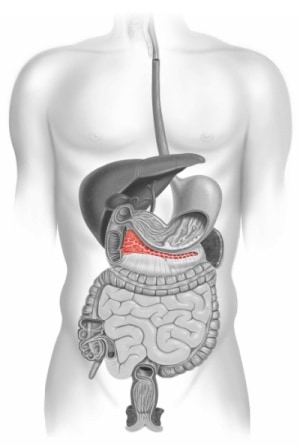 The pancreas is the oblong gland behind your abdomen (between your stomach and spine). The pancreas helps produce juices that break down food and hormones to control blood sugar levels.

Cystic fibrosis
Cystic fibrosis is a genetic disorder that causes your mucus to be thick and sticky, clogging your lungs making it difficult to breathe. It affects your lungs, pancreas, liver, intestines, sinuses and sex organs.

The symptoms and severity vary widely, some people have serious problems from birth while other have a milder version of the disease that doesn’t show up until they are teens or young adults. There is no cure for cystic fibrosis, however treatments have greatly improved.

Pancreatic cancer
Cancer of the pancreas is the fourth-leading cause of cancer deaths in the U.S. It can be difficult to catch since symptoms do not show right away. When symptoms do appear its often yellowing of the skin and eyes, pain in the abdomen and back, weight loss and fatigue.
You are at higher risk for developing pancreatic cancer if you smoke, have long-term diabetes or chronic pancreatitis.

Pancreatitis
Pancreatitis is the inflammation of the pancreas. It usually occurs suddenly and resolves within a few days after treatment. Common symptoms are swollen abdomen, nausea, vomiting, fever or a rapid pulse.

Pancreatitis can be acute or chronic. In severe cases, bleeding, infection, and permanent tissue damage may occur. 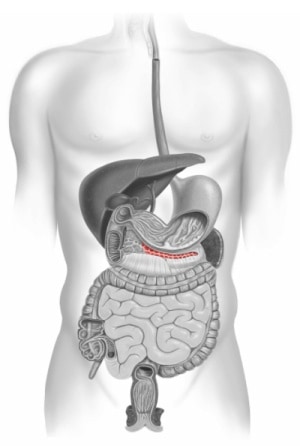 When the pancreas is inflamed, the enzymes inside it attack and damage the tissues that produce them. Pancreatitis can lead to complications like bleeding, infection, and permanent tissue damage may occur. 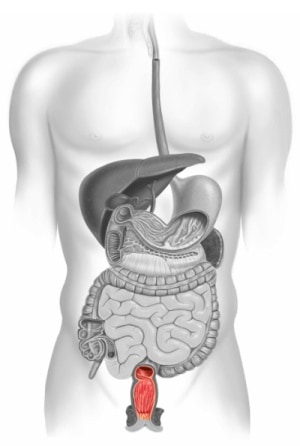 Hemorrhoids
Hemorrhoids are enlarged veins near the lower end of the rectum or outside the anus. 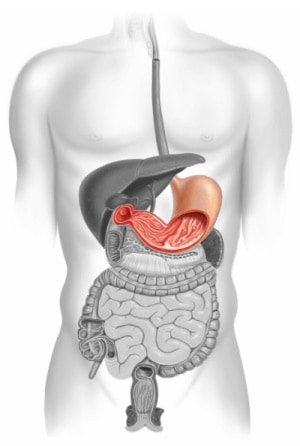 The stomach is a muscular organ located on the left side of the upper abdomen that receives food from the esophagus. As food reaches the end of the esophagus, it enters the stomach through a muscular valve called the lower esophageal sphincter.

Gastritis
Gastritis is the inflammation of the stomach usually by alcohol, medications, H. pylori infection or other factors.

Gastroesophageal reflux (GERD)
When stomach contents and acid travel backward up the esophagus. The most common symptom is heartburn.

Stomach bleeding
Stomach bleeding is when you see black or blood material in your stool. Typically gastritis, ulcers and gastric cancers cause bleeding. 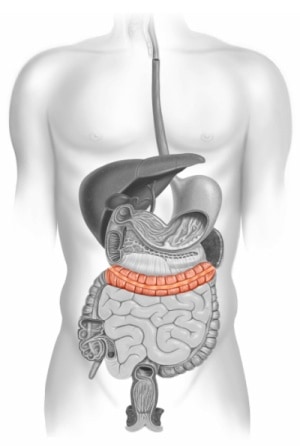